Our pharmacists and certified technicians have been compounding Minoxidil for over 20 years and have the expertise and testing to prove the efficacy and potency of our products.

Click here to view our results vs. our competitor results. 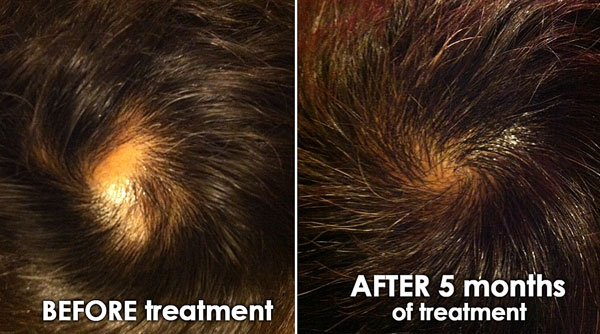 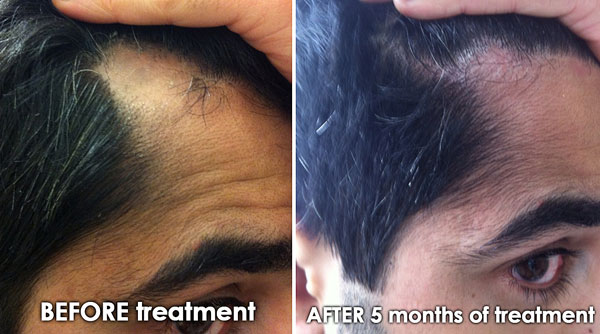 Topical Minoxidil is a product which is used to treat and/or prevent hair loss. Minoxidil is the ONLY FDA -approved TOPICAL treatment for male pattern hair loss. High strength PRESCRIPTION Minoxidil IS MEDICALLY PROVEN to STOP hair loss and REGROW hair (1). Minoxidil effectiveness is dose dependent and the higher the dose the better the hair regrowth.  Minoxidil topical is prescribed to stimulate hair growth in men and women with a specific type of baldness known as androgenetic alopecia (popularly known as male pattern baldness or female pattern baldness). It is not known how minoxidil works, however by stimulating hair follicle cells and by dilating the blood vessels in the scalp, it appears that Minoxidil mimics the actions of Nitric Oxide. It increases the flow of blood, nutrients, and other important substances to hair follicles. One study found that when Male Pattern Baldness patients cease using Minoxidil, hair loss almost always recurs within 3-4 months of cessation. In order for Minoxidil to work effectively, it must penetrate the scalp deep enough to the hair follicle level. Minoxidil is only soluble in standard liquid base at a concentration of 5%. In order to achieve the 15% concentration, a cream or lotion base must be used and minoxidil particles micronized. This results in a rapidly absorbing triple strength minoxidil application. Patient feedback is positive with results being reported as early as two months. The cream may be cosmetically challenging to apply in areas where a significant amount of hair is present, thus it is recommended as a once a day (evening) "spot" treatment for areas that have been slow to respond to other treatment approaches. Murray Avenue Apothecary can also incorporate many of the standard additives for multimodal treatment approaches.

*Finasteride: a 5-alpha reductase enzyme inhibitor and reducer of DHT levels.  When taken orally finasteride (Propecia) and dutasteride (Avodart) are systemic alpha reductase enzyme inhibitors and can have systemic side effects such as libido issues and breast growth. Adding topical finasteride to the hair loss formulation works synergistically with the other ingredients to halt further hair loss and promote thickening and regrowth with less systemic side effects.

Note: Finasteride should not ne used in women.

Using both oral and topical Finasteride may lead to unwanted side effects. We do not recommend using these products together. Anyone with a history of allergy to Minoxidil or other components of the product should not use this medication. Minoxidil has potentially serious side effects if absorbed in large amounts into the body. Persons with a history of heart disease should consult their doctor before using this product. Do not apply to irritated, blistered, bleeding, or broken skin. Do not use more than the recommended dose, and do not apply it more frequently than twice a day. Do not use hairdryers to accelerate drying of the medication.

Skin and Scalp - Topical should not be applied to inflamed, infected skin or skin with open wounds.

In addition Minoxidil, your product may contain one or more of the following ingredients:

Retinoic Acid: may improve the ability of Minoxidil to stimulate the regrowth of hair in persons afflicted with Male Pattern Baldness and may also directly stimulate the hair follicles. Clinical trials using topical Retinoic Acid combined with Minoxidil indicate that this combination may increase hair regrowth by up to 100%.  Hair loss clinics report that existing hair becomes stronger and thicker after two to three months of combined 2% Minoxidil and 0.025% Retinoic Acid applied topically.  80% of patients achieve some regrowth of hair after six months of this treatment and 90% of patients experience regrowth within one to two years of this treatment.  After two years, hair regrowth is often strong and healthy. Retinoic Acid may improve the absorption of Minoxidil into the dermis of the scalp where the hair follicle is located. Although the exact mechanism of action of Retinoic Acid on hair growth is not yet known, evidence suggests that Retinoic Acid may decrease the cohesiveness of the Epithelial Cells of the hair follicles; and may act on the skin of the scalp as a minor skin peel, thereby permitting more of the active ingredients in other hair restorative formulas to permeate through to lower layers of the skin of the scalp so that they can reach the hair follicles and exert their activity. One female subject with pronounced alopecia for more than 20 years had regrowth of hair using only tretinoin (Retinoic Acid) for a period of 18 months. Tretinoin (Retinoic Acid) has been shown to promote and regulate cell proliferation and differentiation in the epithelium and may promote vascular proliferation. These factors are important for hair growth promotion.

Azelaic Acid:  Azelaic acid may be incorporated into solution either alone or in combination with minoxidil to topically decrease DHT levels. In vitro, azelaic acid acted as a scavenger of oxy radicals and inhibits a variety of oxidoreductive enzymes including 5-alpha reductase, the enzyme responsible for converting testosterone to DHT. Azelaic acid (0.1 to 3.0 mmol/l) has been shown to produce a competitive concentration dependent inhibition of 5-alpha reductase activity in homogenates of human foreskin. Azelaic acid is being studied for potential antimycotic and antiviral properties. The multiple actions of azelaic acid cause a normalization of keratinization and a decrease in the free fatty acid content of skin surface lipids. It also helps to maximize the absorption of Minoxidil.

Hydrocortisone: is a class of drugs called steroids, it reduces swelling and decreases the body's immune response. We use it to decrease inflammation and irritation with higher dose Minoxidil preparations. HC is effective in alopecia areata as an adjunct to injected steroids.

Acetyl Glutathione: the body's only naturally manufactured antioxidant. Acetyl Glutathione MATURES the hair, unlike the biotinoyl tripeptide which only causes immature hairs to grow and NOT mature. Our Acetyl Glutathione is compounded with 3% Biotin in a Propylene glycol base - the Biotin promotes growth of immature hairs and the Acetyl Glutathione promotes the maturation of the hair follicle.  Acetyl-Glutathione affects: Anti-inflammatory, Mitochondrial stimulation and increased number of Mitochondria, Anti-fungal and Anti-viral effects, Detoxifies DHT and Xenoestrogens found in hair care products. Glutathione exerts Antioxidant effects that protect hair follicles from Free Radical damage. Inactive hair follicles are deficient in Glutathione. This product is used at the hairline and temples prior to applying Minoxidil in men and women. Note: Hair health involves the follicle. 1/3 of hair is in the growing phase, 1/3 is in hair loss phase, and 1/3 is in the process of development to maturity. The goal is to protect the DNA and prevent free radicals from breaking down the cells in the follicle.

Vitamin E: known to increase blood circulation to all areas of the body (including the scalp). It can help your hair absorb more essential nutrients and minerals. This is always added to our Acetyl-Glutathione/Biotin 3% formula and all Minoxidil formulas.

Progesterone: a hormone produced by both men and women which completes the 5 alpha reductase enzyme that converts serum testosterone to DHT.  With age, the production of progesterone decreases. (2% leave-in applied topically) may retard further hair loss and may stimulate some regrowth of hair in men and women afflicted with androgenetic hair loss and hormone imbalances.

Taurine: may help to prevent/treat Male/Female Pattern Baldness (by inhibiting the process of Fibrosis in the sheath that surrounds hair follicles (known as perifollicular Fibrosis)). Also found in our product ZEN.

Spironolactone: (applied topically to the scalp) in clinical trials with persons afflicted with MPB resulted in 50% of persons exhibiting a 10% or greater number of new hairs on their heads after twelve months of therapy.  This indicates that Spironolactone may be utilized as an adjunct to other treatments for MPB or FPB. (3) (4) Typically dosed in 2-5% stand alone solutions or lotions. Spirinolactone cannot be mixed with minoxidil due to incompatibilities. It also quickly degrades when exposed to heat and light. A better choice is azelaic acid. Click here for more information on Spironolactone.

The Retinol form of Vitamin A: (applied topically) may facilitate hair growth in persons affected by Male or Female Pattern Baldness.

Green Tea: may inhibit the effects of Androgen Hormones that cause Male/Female Pattern Baldness (due to the Catechins (Tea Polyphenols) in Green Tea).

Saw Palmetto: (berries ingested orally) may retard further hair loss in persons afflicted with Male/Female Pattern Baldness (due to the Phytosterols in Saw Palmetto inhibiting the conversion of Testosterone to Dihydrotestosterone by the 5-Alpha-Reductase enzyme) and Saw Palmetto (extract applied topically to the scalp) also retards further hair loss. We offer DHT/Hormone Manager.

Flax Seeds: may retard the progression of hair loss in people with Male/Female Pattern Baldness (due to the Plant Lignans content of Flax Seeds inhibiting the binding of Dihydrotestosterone (the Hormone believed to cause androgenetic alopecia to Sex Hormone Binding Globulin (SHBG).

(5) Ferry JJ, et al. Influence of tretinoin on the percutaneous absorbtion of minoxidil from an aqueous topical solution.Clin Pharmacol Ther (1990) 47:439-46.

(12) Absorption
Topical:  1.6 to 3.9% of the topically applied Minoxidil dose is absorbed percutaneously (Franz, TJ: 1985)   To offset this low percutaneous absorption rate, MDF is custom compounded as a topical 15% Minoxidil solution without an absorption enhancer, which provides an equivalent or superior bioavailability of Minoxidil as OTC 5% Minoxidil with an absorption enhancer, such as high concentrations (>20%) of propylene glycol, which have been shown to cause itching, scalling or scalp irritation in 6% of patients (Hogan, DJ: 2000, Cantanzaro, JM: 1991).

(13) Dosage and Administration
Adults - (topical) - Apply 15% (500 mg/3.3 ml) qd to affected scalp areas . If unresponsive, greater absorption may be achieved by splitting the total daily dose into two applications. These applications should be spaced at least 4 hours apart, since 75% of Minoxidil is absorbed within 4 hours of application. (Ferry, JJ:1990)