Here’s a fun fact: the “K” in vitamin K comes from the German word “koagulation.” That makes total sense when you consider vitamin K’s role in the human body. The fact though is, “vitamin K” is a bit of a misnomer. Vitamin K is not just one vitamin and not even just one K. Vitamin K1 represents the phylloquinone family of vitamin K molecules and K2 represents the menaquinone molecules. You see, there is a whole “family” of molecules wrapped up in the vitamin K name. Naturally, vitamin K health benefits — for skin, for bones, and for cardiovascular health — are many.

What does vitamin K do for your body?

According to the Linus Pauling Institute, “Vitamin K is the essential cofactor for the carboxylation of glutamic acid residues in many vitamin K-dependent proteins (VKDPs) that are involved in blood coagulation, bone metabolism, prevention of vessel mineralization, and regulation of various cellular functions.” (1) That’s why vitamin K serves many important functions in the human body.

· Prolonged antibiotic use
· The cardiac drug amiodarone
· Cholesterol-lowering medications such as cholestyramine and colestipol
· The use of orlistat, mineral oil, and the fat substitute: olestra

When it comes to vitamin K, there is no Recommended Dietary Allowance (RDA) but there is an Adequate Intake (AI) recommendation. Below is a table that represents the recommended AIs for vitamin K from the National Institutes of Health Office of Dietary Supplements (4):

The most abundant food sources of vitamin K are leafy green vegetables like collards, turnip greens, spinach, kale, broccoli, etc. These are the K1 phylloquinone sources of the K family. Menaquinone forms of K are found in fermented foods and animal products. For example, fermented food natto is an abundant source of MK-7. Vitamin K is also available as a dietary supplement in the form of K1, K2, MK-4, and MK-7. 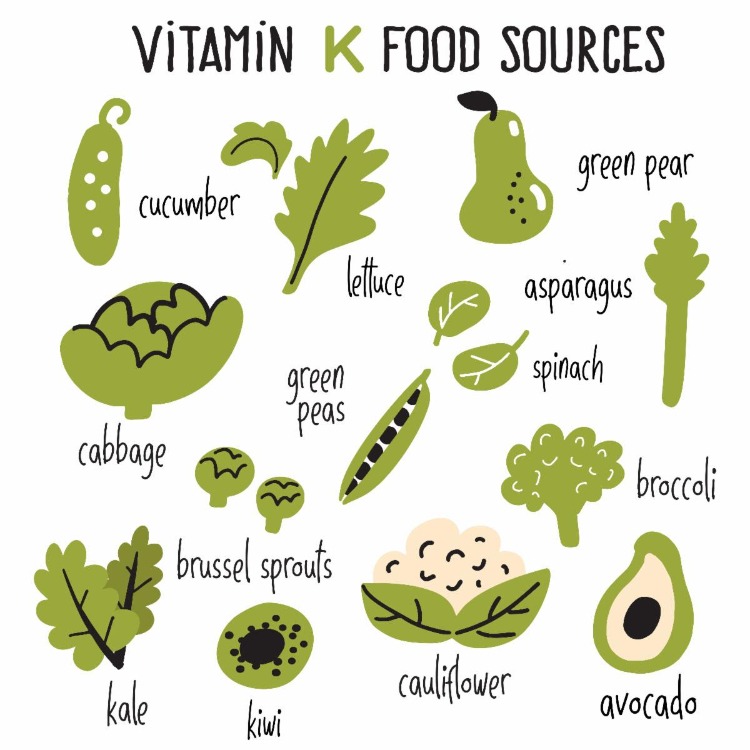 The two key areas of clinical interest regarding vitamin K supplementation are cardiovascular and bone health.

According to a 2018 review published in BioMed Research International, vitamin K plays a pivotal role in supporting bone formation and function. (5) The researchers conclude, “Vitamin K exerts its anabolic effect on the bone turnover in different ways such as promoting osteoblast differentiation, upregulating transcription of specific genes in osteoblasts, and activating the bone-associated vitamin k dependent proteins which play critical roles in extracellular bone matrix mineralization.”

This is consistent with a 2015 review published in the journal Open Heart that describes a randomized, placebo-controlled, double-blind trial, as well as a meta-analysis. Both show vitamin K supported bone strength and bone mineral density. (6) Previous research also makes the correlation between low vitamin K levels and poor bone function including a 2008 trial published in the British Journal of Nutrition involving 307 healthy children. (7) This is consistent with a 2006 systemic review and meta-analysis of randomized controlled trials published in the Archives of Internal Medicine. (8)

When it comes to cardiovascular function, vitamin K is a cofactor in the activation of calcification inhibitor MGP (matrix Gla protein) and is therefore involved in vascular calcification. Vitamin K deficiency can lead to loss of function of the MGP gene, which can negatively impact heart function.

A 2017 trial published in the journal Hypertension found an association between poor heart function and low vitamin K and D levels. (9)

This is consistent with a 2017 review published in Current Nutrition Reports where the researchers conclude, “Overall, observational studies indicate that vitamin K has a potential role in cardiovascular health…” (10) In that review, the researchers also found that many of the studies investigated the combination of vitamin K and D. The researchers speculate that “vitamin D may preserve vitamin K-dependent protein activity and can thereby contribute to vascular health.”

An interesting 2016 statistical review published in the journal Cureus found a direct link between vitamin K deficient diets and poor heart function. (11) In fact, this analysis demonstrated that too little vitamin K in the diet can negatively impact heart function as much as smoking. The lead researcher reminds us that animal trials and human observational studies have demonstrated that vitamin K deficiency can lead to calcification of the coronary arteries and other vessels.

When it comes to vitamin K’s role in bone and heart health, the research is compelling. For patients needing extra support in these two areas, in particular, vitamin K supplementation may be worth considering. In any case, adding some more greens to your plate and to your palette can help ensure you are “koagulating” the many benefits of vitamin K!