Do you suffer with anxiety or depression? Do you struggle to fall asleep or stay asleep throughout the night? Men, has your libido fizzled? Women, do you dread the weeks before your period? If you answered yes to these questions, an underlying neurotransmitter imbalance may be the cause. Simple testing may help you find personalized solutions.

Neurotransmitters are chemical messengers used by the nervous system to relay information from one nerve to another. The body relays information through the nervous system about anything that it experiences, hears, touches, smells or ingests – continuously communicating back and forth between the brain and the body. Optimal neurotransmitter balance is required to maintain proper health. Imbalances can cause the brain and the body to be over-or under stimulated, producing neurological or psychological symptoms. Can a Dysregulated Nervous System Impact Health? Like hormones, neurotransmitters require a delicate balance to keep the body functioning at a peak level. Genetics, environment, chemicals and nutritional deficiencies are a few factors that can result in over- or under-production of neurotransmitters. Once out of balance, the nervous system begins to compensate – which, in time, can lead to neurological or psychological symptoms. Some of the more common psychological conditions today are known to be accompanied by neurotransmitter imbalances. However, it’s also possible for individuals to present with similar symptoms yet have unique foundational imbalances. Testing helps clarify these root issues.

There are many neurotransmitters in the body. The primary messengers are divided into two groups.

Glutamate functions as the “on” switch in the brain. It’s the major excitatory neurotransmitter that decreases sleep, optimizes learning, memory and mood and improves libido.

Histamine plays a role in the body as a neurotransmitter that increases metabolism, promotes wakefulness and suppresses appetite.

GABA functions as the “off” switch in the brain. It’s the major inhibitory neurotransmitter that improves mood, relieves anxiety and promotes sleep.

Glycine plays a dual role as a neurotransmitter and amino acid that serves as a building block to proteins, improves sleep quality, calms aggression and serves as an anti-inflammatory agent.

Serotonin, generally regarded as the “happiness molecule,” contributes to the feeling of calm and well-being that eases depression and anxiety, supports sleep and decreases appetite.

Do These Symptoms Sound Familiar? If you regularly suffer from 3 or more of these symptoms, you might have a neurotransmitter imbalance.

Fatigue: An imbalance between excitatory and inhibitory neurotransmitters is likely.

PMS or PMDD: Imbalances such as Serotonin, Dopamine, Norepinephrine and GABA are often involved. 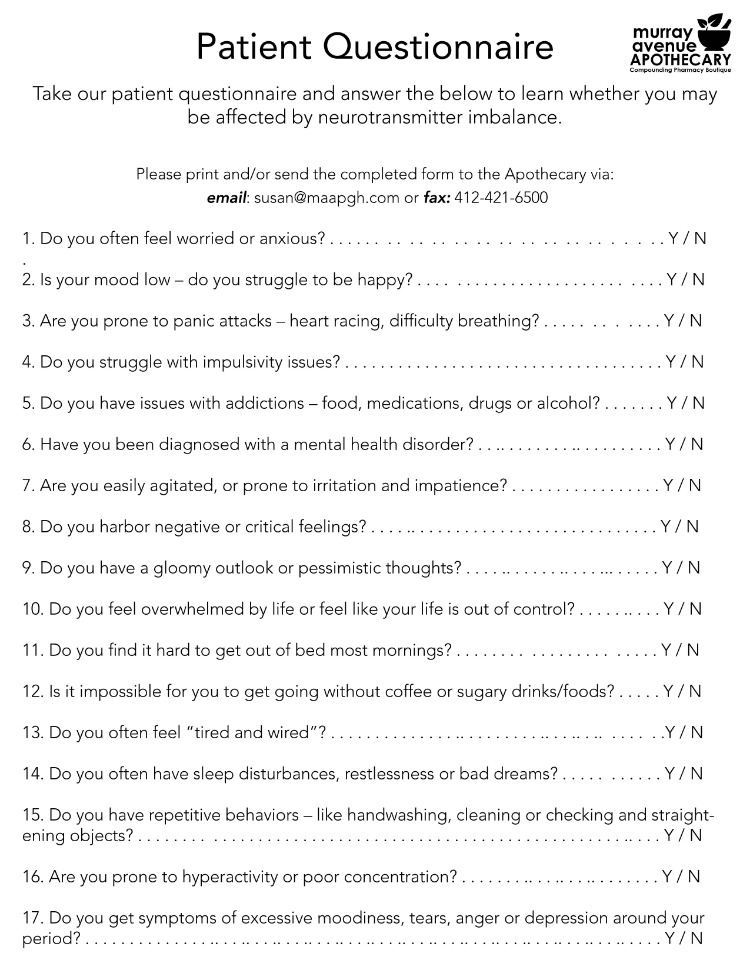