Glutathione is the most powerful and prevalent antioxidant and detoxifier of intracellular (inside the cell) tissue. It is a potent antioxidant, antiviral, and anti-inflammatory found in every cell of the body. The body makes about 100mg of Glutathione per day. Three hundred milligrams daily are needed to restore Glutathione levels. Its functions include helping to prevent cell damage by neutralizing harmful molecules known as free radicals; regulating DNA and protein synthesis; and promoting cell growth and immune response. The lungs use most of the Glutathione in the body and people with Emphysema, COPD, and Asthma benefit greatly from replacement Glutathione.

Well-known and widely used antioxidants such as Vitamin C, Vitamin E and Selenium neutralize free radicals. They occur naturally in nature, but not in the body – they must be introduced as part of a balanced diet. The body itself manufactures its own natural antioxidants. The most important of these is glutathione. Because all other antioxidants depend upon the presence of glutathione to function properly scientists call it “the master antioxidant”.

Healthy people also benefit from elevated glutathione levels through an enhanced ability to fight off toxins, infectious disease, pre-cancerous cells and the aging process itself. Diminished glutathione levels are a symptom of aging and are particularly evident in such ailments as Parkinson’s disease and Alzheimer’s disease.

Glutathione is also important to physically active people. Many world-class athletes are discovering that well-maintained glutathione levels give them the edge over their competitors, bringing greater strength and endurance, decreased recovery time from injury, less muscle pain and fatigue, and muscle-promoting activity,

Increasing your glutathione level may naturally increase your energy, detoxify your body and strengthen your immune system. Glutathione also aids in liver support, by destroying environmental toxins, thus helping the liver to function as the main production site and storehouse for glutathione. The data indicate glutathione’s effectiveness not only in populations who are immune-suppressed, but also in those who are stressed, aging, lacking sleep, or with any prolonged illness.

Reduced Glutathione, commonly known as Glutathione or GSH is a tripeptide consisting of L-Glutamine, L-Cysteine, and Glycine and is ubiquitous in living systems. It is produced naturally in our cells. It functions both as an antioxidant (and an anti-toxin) and is a major defense system against illness and aging. Our glutathione level actually indicates our state of health and can predict longevity. Although there are more than 60,000 published papers on the beneficial effects of glutathione replacement, it is still largely ignored by mainstream medicine. In the near future the importance of glutathione will be widely recognized because it has the ability to boost the immune system and fight off the damage of free radicals on the cells. 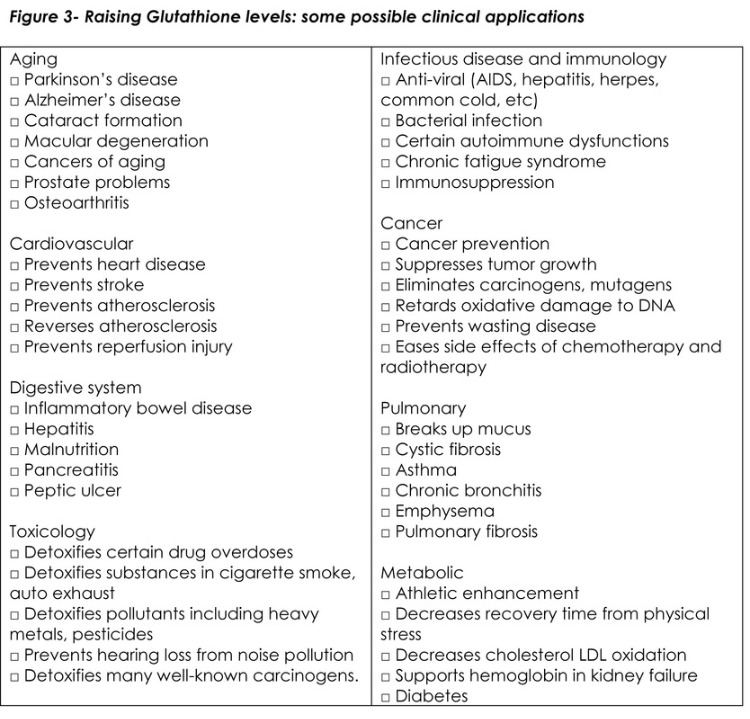 In the last 5 years, over 25,000 medical articles about this substance have been published. Each and every cell in the body is responsible for its own supply of glutathione, and must have the necessary raw materials to make it. Glutathione is always in great demand and is rapidly consumed when we experience any sort of pressure – illness, stress, fatigue, and even exercise. Glutathione levels also diminish as we age and many diseases normally associated with aging have been linked to glutathione deficiency, such as heart disease, stroke, and diabetes.

What Are Some of the Factors Affecting Glutathione Status?

What happens if Glutathione levels are low?
Glutathione deficiency contributes to oxidative stress, which plays a key role in aging and the worsening of many diseases including Alzheimer's disease, Lupus, Parkinson's disease, Liver disease, Cystic Fibrosis, Psoriasis, Sickle cell anemia, HIV, AIDS, Cancer, Heart attack, all forms of Arthritis, most Autoimmune Disorders, and Diabetes. People with Chronic Fatigue Syndrome and Fibromyalgia, Adrenal fatigue, and Hepatitis C, all forms of Herpes, including Shingles and Epstein-Barr, respond very well to glutathione replacement. Autism is also linked to low glutathione levels. Studies have shown that levels are typically 50% lower in children with autism.

How will supplementation with Glutathione help me?

The benefits are innumerable, but some effects that have been proven in studies are:

What is the best form of Glutathione to take?

Glutathione by itself is not bioavailable when taken orally and not appreciably absorbed in human or animal models. Most oral forms of glutathione are foul smelling, and the majority of an oral dose is oxidized before it can be absorbed and used by the cells.

In order to have sufficient bioavailability in an oral product, glutathione must be modified to Acetyl-Glutathione. Acetylation is the way all proteins, amino acids and peptides are transported by the body. In any molecular biology textbook, it states that all peptides are transported in the body and into the brain in an acetylated form, to prevent peptidase enzymes from decomposing the peptides. That is why acetyl Carnitine passes the blood brain barrier and carnitine does not. The same is true of glutathione. Acetyl-glutathione is a food substance recognized as a Dietary Supplement and is generally regarded as safe, when used as directed. Acetylated Glutathione is stable in all of the digestive system and is well absorbed. Studies show Acetyl Glutathione increased intracellular glutathione and affected oxidative stress biomarkers positively.